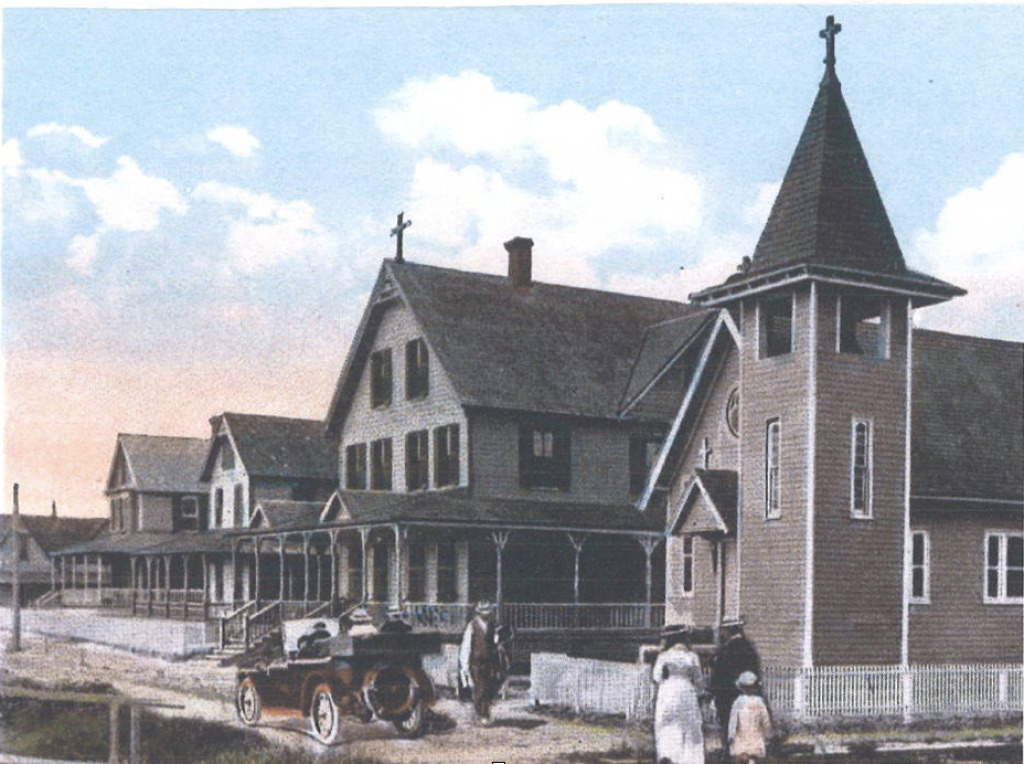 With the nearest Catholic Church 16 miles away in Milford, Most Rev. John J. Monaghan, third Bishop of Wilmington (1897-1925), felt that it was time to build a church to meet the needs of the increasing Catholic population in the Lewes / Rehoboth Beach area.  In 1905, the Diocese of Wilmington purchased property in Rehoboth Beach for the site of a Catholic Church.  All the property, which ran the full length of the oceanfront block between Laurel Street and Brooklyn Avenue, was originally owned by the Rehoboth Beach Camp Meeting Association of the Methodist Episcopal Church.  The Diocese established a rectory and a chapel on the property.  Two large cottages were also built for the Sisters of St. Francis, teaching and nursing order in the diocese, as a summer vacation retreat.

The small chapel was unable to accommodate all the Catholic worshipers who began swelling the Rehoboth Beach community in the summer.  So, a new frame church, overlooking the ocean, was built.  The church was named in honor of St. Agnes, the patron saint of the first Mother Superior of the Order of Saint Francis of Assisi.  Bishop Monaghan celebrated the first Mass there on July 7, 1906.  The following is an excerpt from an article that appeared in the Wilmington Morning News on June 18, 1906, regarding the opening of the new Church:

The new Roman Catholic Church at Rehoboth, the first in Sussex County, is rapidly nearing completion and the first services will be held in it about the first of July. The new edifice, while not a pretentious one, is fitted to the needs of a summer resort which, heretofore, has been but scantily patronized by Catholics because there was not place for them to worship. A few years later, Bishop Monaghan established a temporary church at the resort, but the needs became so pressing that it was decided to erect a building to be devoted to the purpose alone.

The church when dedicated will be known by St. Agnes-by-the-Sea. The seating will be about 200 persons and the parish will be in the charge of the Reverend Father Felix Hintermeyer, O.S.B., of St. Mary's College, Belmont, NC. The building is located on a plot of ground adjoining the summer home of the Sisters of Saint Francis and will be used by them as a chapel.

Although it was reported that Father Felix Hintermeyer was called to the ministry in Rehoboth, the records of the Chancery Office of the Diocese of Wilmington do not support this appointment.

St. Agnes-by-the-Sea was a mission to St. John the Apostle Church in Milford.  Services were predominantly celebrated during the summer months; Sunday services during the winter depended upon the availability of a priest.

The early history of St. Agnes-by-the-Sea was influenced considerably by severe storms that battered Delaware's Atlantic Coast.  After receiving some damage after a Nor'easter on December 7, 1914, the church was moved farther back from the beach and turned so that its front faced the beach and ocean.  After another severe storm in April of 1918, the church was again moved further back from the oceanfront.  During the Great Storm of March 1962, the old church suffered irreparable damage and was razed shortly thereafter. 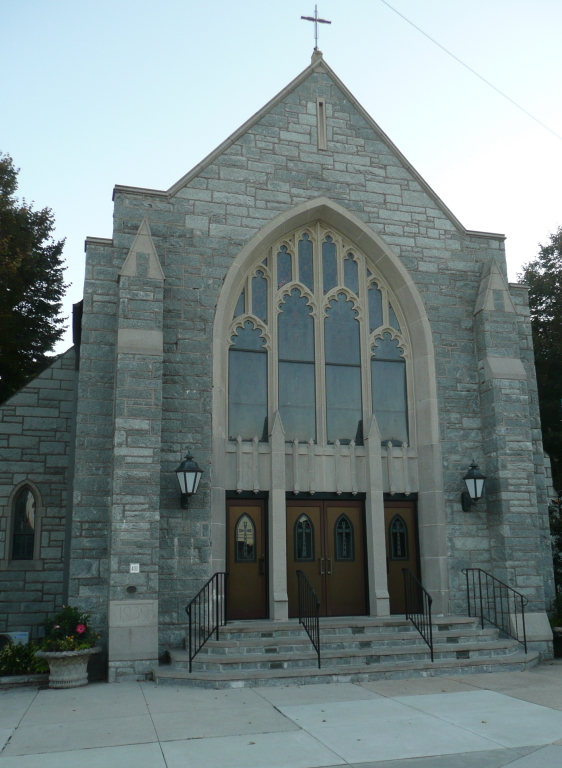 Because of the increasing numbers of Catholics in the region, a new church—Saint Edmond's—was begun in 1939 at King Charles Avenue and Laurel Street.  The first Mass was Sunday, May 12, 1940.  The Church was dedicated on September 1, 1940. Most Rev. Edmond Fitzmaurice, fourth Bishop of Wilmington (1925–1960) and for whom the church was named, conducted the dedication service.

After St. Edmond's was established, the Diocese of Wilmington deeded title to the old St. Agnes-by-the-Sea Church property to the Franciscan Order.  A new residential facility was built and used by the nuns until the end of the summer of 1941.  In 1946, the Order decided that operating its seaside retreat was becoming too great a burden. It sold the entire property and buildings. Today, the Star-of-the-Sea condominiums occupy the site of the former church and Franciscan retreat.

Although St. Edmond's took care of an increasing number of Catholics during the summer months, it was open only on Sundays during the winter months, with the priest-in-charge coming down from Milford.  In 1952, St. Edmond's was no longer a mission of St. John the Apostle and became a parish in its own right. Monsignor Francis J. Desmond was the first pastor.

In 1954, St. Edmond's built an elementary school on the property adjacent to the church.  This school, staffed by Benedictine Nuns from Ridgely, Maryland, was opened with classes for grades one through eight.  Students came from Milton, Georgetown, Millsboro, Lewes and Rehoboth Beach.  In 1969, the school was closed when the Benedictine community was obliged to withdraw first some and then all of the sisters. 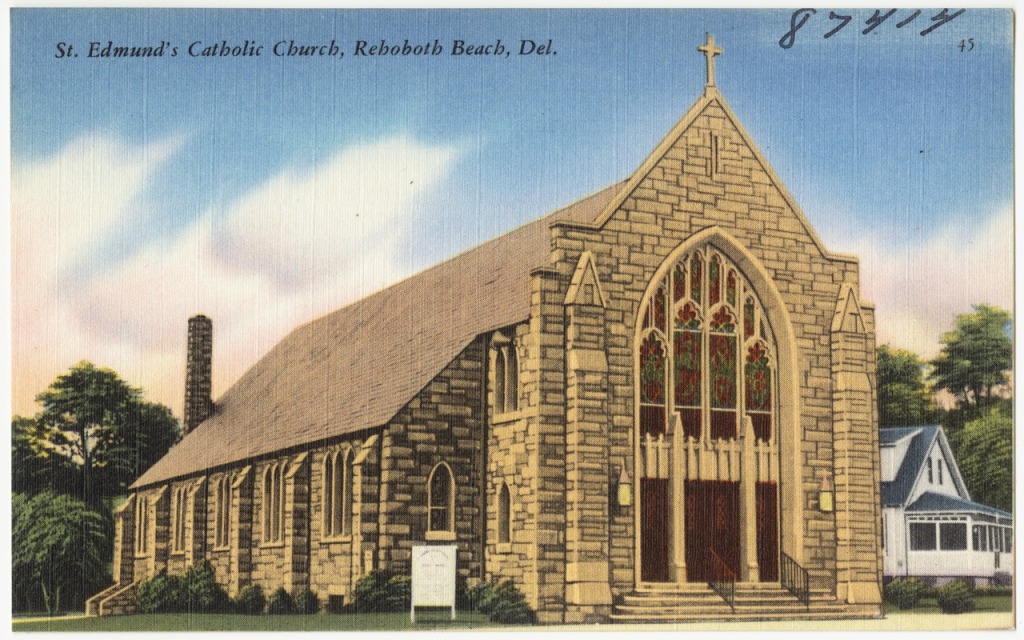 In August 2007, Fr. Raymond Forester invited several parishioners to serve on a committee to raise funds for upcoming major renovations.  The committee prepared a Case Statement, approved the campaign theme and logo, and established a goal of raising at least $400, 000, and implemented specific campaign phases, actions and communications, between August and November 2007.

More than 500 parishioners and visitors contributed nearly $700,000 to the campaign.  Contributors $1000.00 or more have their names memorialized on special plaques on the rear side walls of the church.  Several parishioners participated through contributions dedicated to specific items for the church.

In 2007, Fr. Forester and the parish Building and Maintenance Committee determined that major interior and exterior renovations were needed to meet increasing Ministry needs.  Interior renovations began in December 2007, requiring the closing of the church.  Renovations included a new insulated ceiling, fans and light fixtures; refinished pews, and new kneelers: new carpeting: the walls were painted; new Stations of the Cross plaques and a new Crucifix were installed.  These renovations were completed in April 2008.  The Liturgical Celebration and Blessing of the re-opened and renovated St. Edmond’s Church took place on April 19 & 20, 2008.  Exterior renovations began in December 2008, and included re-pointing the church stone entrance way, replacing several pre-cast stones and installing new front steps and exterior lights.  The renovations were completed in April 2009.

In 2009 - 2010, St. Edmond’s celebrated the 70th anniversary of its establishment and opening, with a number of special parishioner and community events and projects.

The events included the reading and display of a Papal Blessing, a Mass of the Renewal of Wedding Vows, and an Anniversary Mass, celebrated by Bishop of Wilmington W. Francis Malooly, followed by a reception for parishioners and guests. Two major History anniversary projects were completed: an exhibit/display of the history of St. Edmond’s and the publication of the St. Edmond’s history book and DVD package.  In March 2010, Fr. Forester was presented with a special plaque, recognizing St. Edmond’s as a Historic Site, by the Rehoboth Beach Historical Society: the plaque is located near the cornerstone in the front of our church.  In addition, the Rehoboth Beach Lions Club featured St. Edmond’s Church on the cover of their 2010-11 Rehoboth Beach Telephone Directory; the Directory also includes a history of St. Edmond’s.

In June 2013, Fr. Ray Forester, pastor of St. Edmond's since 2000, retired.  On June 27, 2013, Fr. Joseph Piekarski was appointed the 11th pastor of St. Edmond Church.  In this period, associate pastor Fr. John Lunness was re-assigned to St. Luke/St. Andrew in Ocean City, Maryland, and Fr. Chris Hanley was appointed to the same position at. St. Edmond Church.  In 2010, Sister Maryanne Zakreski was appointed to the position of Director of Religious Education; during this period Deacons John Smith and Jerry Shaw retired.  Also in the same period a Youth Leadership Council was formed.  The mission of this ministry is to enhance parish liturgical and social programs and events for the youth and young families of the parish.

On June 24, 2015, Fr. William Cocco was appointed the 12th pastor of St. Edmond Church when Fr. Piekarski was reassigned to a different parish.

In 2014-15, we, as a parish, celebrated our Diamond Jubilee.  We Remembered our past by recognizing various milestones in the history of St. Edmond, including the beginning of construction in September 1939..  We Celebrated our life as the family and Church with a Seder, Mardi Gras, Family Feud game night, picnic, and trip to Gettysburg and Emmitsburg.  We Believed by renewing our faith life with a Memorial Mass celebrated by Bishop Francis Malooly, a parish mission, and the Renewal of Marriage Vows.  We Prepared for the future by filling a Time Capsule to be opened in twenty-five years.